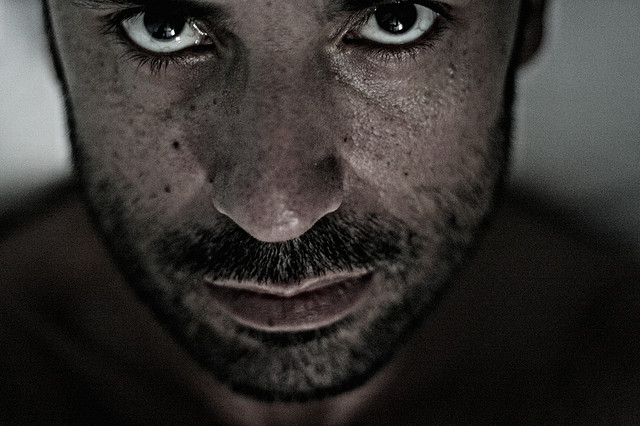 It is characterised by a number of symptoms:

– Failure to conform to social norms or lawful behaviours
– Deceitfulness, as indicated by repeated lying, or conning others for personal profit or pleasure
– Irresponsibility, impulsivity or failure to plan ahead
– Irritability and aggression, as indicated by repeated physical fights or assaults
– Reckless disregard for safety of self or others
– Lack of remorse, as indicated by being indifferent to or rationalizing having hurt, mistreated, or stolen from another.
– Some research has shown that individuals with APD are indifferent to the threat of physical pain, and show no indications of fear when so threatened; this may explain their apparent disregard for the consequences of their actions, and their lack of empathy for the suffering of others.

Nor, necessarily, does APD imply that a person is necessarily exhibiting visible criminal behaviour. It is hypothesized that many high achievers exhibit APD characteristics.

Those individuals who have an Antisocial Personality Disorder will often present themselves in a way that shows an absence of concern regarding common rules of society. They have no concern for societal expectations, and are frequently involved in actions that are sometimes only minor violations, which are not only considered to be in violation of societal rules but also are a violation of other people’s rights. The term “sociopath” is a popular term that has been used to describe this type of individual. This diagnosis is only given to those who are over the age of 18, however, in most cases, there has been a history of behavior before the age of 15 that would be considered antisocial. These individuals will quite often show a pattern of truancy, lying, substance abuse, delinquency, and/or running away from home. They may also have a great deal of difficulty dealing with the law. Once these individuals have become adults, there is often a pattern of committing illegal acts. They find it difficult, and often fail to live up to job requirements, parenting responsibilities, or financial responsibilities. Long term marital relationships are difficult to maintain by these individuals. Often times they will find themselves involved in drug abuse and alcohol.

Symptoms and signs of Antisocial Personality Disorder may include:

There is no effective method, at this time, which is widely accepted for the treating of individuals who display sociopathic personalities. It is difficult to treat these individuals because they cover up their personal faults, tend to be extremely manipulative when being treated, and will often lie. Their behavioral patterns occur without any personal insight in regards to their behavior. Often they will exhibit a great deal of enthusiasm for treatment. However, this is usually short-lived and is only exhibited immediately after the incident that brought them into contact with the law or societal pressures. Once their anxiety has been reduced or relieved, they most frequently will cease treatment, falling back into the same patterns of sociopathic tendencies that initially brought them into treatment. Because this pattern is often repeated over and over, the prognosis, in most cases, is unfavorable for the individual’s entire life.

There are those who would suggest that an Antisocial Personality Disorder is simply a medical term for criminality; this is not so. In actuality, this disorder describes a pervasive personality which is extremely resistant to treatment. Of all these individuals social isolation, vagrancy, alcoholism, and suicide are quite common, however, the usual emotional depression or anxiety that one would expect in these situations is often lacking. Even though they frequently have run-ins with the legal system, they most often present themselves as normal and charming; but this is just a façade.

Individuals with this condition usually find themselves fixed in levels of development from an earlier time in their life. Parental rejection is often a component and usually there is an indifference towards the need for satisfaction or security. Because of this, the most recent psychoanalytic theory believes that the ego (the part of our makeup that controls our reactions between conscience and impulses) is underdeveloped. Due to this lack of ego strength, behavior is most often misdirected, resulting in the need to have immediate gratification. With a superego that is underdeveloped, the individual finds it easy to pursue gratification without any guilt or regard for others. To determine if an individual is likely to develop this disorder, professionals look at the individual’s functioning ability in making this determination. The following predispose factors and circumstances are usually present:

This condition is seen more frequently in males as opposed to females. Usually it will present in females at the onset of puberty, when it does occur. In males, the beginning is often earlier, in childhood. After the age of 30, these behaviors will often diminish somewhat, as individuals learn more effective methods of staying within societal norms, and seem to “mellow out” at this time. These patients tend to lack the needed motivation for change and are very manipulative. Voluntary therapy is rarely sought out and most of the time, they are forced into therapy due to a particular aspect of their life or encounter with the law. A look at the individual’s history will usually reveal significant shortages in marital, occupational, and social functioning. Lack of emotional attachment to other people is often noted by therapists, in regards to these individuals.

Individuals with this condition tend to be charming, engaging, personable, and quite often have above average intelligence. This persona, however, is merely a veneer that is intended to deceive those around them and help them to exploit others. The feelings of other people are of no concern to them, as their own emotional reactions are extreme. They tend to believe that the only thing of importance is themselves and are often preoccupied with their own interests. Just like their responsiveness to therapy, their judgment and insight is usually poor. Therapy should be focused on helping the client to develop a relationship that is trusting, with the significant people in their lives; spouses, children, etc. They also must be taught healthy ways in which they can deal with anxiety. They must be taught how to postpone their own gratification, in order to curb their impulses. This is a positive step toward the development of a more social and positive way of interacting with others. Treatment should continue to focus on the development of alternative methods of interacting with others as opposed to the manipulative methods used for self gain. You can measure the progress being made in terms of the individual’s self-control and the appropriate use of assertive, as opposed to aggressive, behaviors used to obtain the responses desired. Because frustration and anxiety tend to be the greatest two emotions which cause conflict with those in authority and others, it is important for the individual’s therapy to focus on appropriate means to recognize and diminish these conditions. Therapy for these individuals tends to be long-term as response is usually extremely poor. The reason for this however, may be because most of these clients will prematurely discontinue their therapy and will only remain if coerced or forced, which of course, only complicates treatment further.