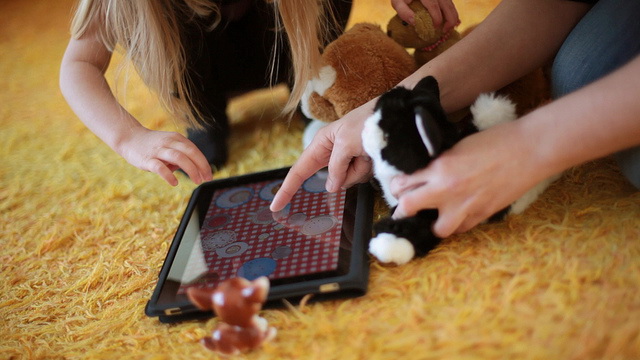 Children are often poor at verbalizing what is bothering them; parents and guardians are left to understand their children by observing them and waiting for issues to become evident in their behavior. Often, when children are having problems, they “act out”, rebel, or become anxious and unusually withdrawn. While these actions may be frustrating, it’s important to remember that they are often cries for help.

Parents often become reactive, however, as they worry that their child’s behavior will grow worse over time, and result in more serious problems during adolescence and into adulthood. Parents may also be judged negatively and face criticism and complaints from teachers, daycare workers, coaches, or other parents, which leads to parents wishing to shut down the negative behaviors as quickly as possible. This, however, is seldom effective; instead, parents and guardians should seek help for the troubled child in the form of therapy —Notably, through the child-centric approach known as play therapy.

What is Play Therapy?

Play therapy is a method of psychotherapeutic treatment which was specifically created to help children between the ages of three to 12 years old. While its title may sound causal, play therapy is administered by a trained mental health professional, called a play therapist.

Children habitually use play to understand the world around them; a play therapist exploits this natural ability to work with a child in exploring and resolving problems through play, by making the play itself therapeutic in nature. This is performed in a counselling space known as a playroom, which is designed to look and feel like a standard playroom, while including toys that have actually been specially chosen to encourage the safe expression of feelings and streamline the learning of healthier behaviors.

These toys are usually nothing that appear immediately out of the ordinary; they are typically just miniatures of things that occur in “real life” (people, animals, cars, fantasy figures, etc.), along with puppets, stuffed toys, dolls (often with their own furnished dollhouse) articles of dress and props for dress-up and make-believe play, art supplies, blocks, or sometimes items for indoor active games, such as ring toss.

Children are made comfortable with the area first by engaging in open-ended play, granted to complete freedom to play in the way he or she prefers, as long as this play causes no harm to the self or others. The therapist will observe the child, and as time goes on, begin to take a more active role, becoming more directive and encouraging the child to play with specific items or participate in certain activities that the therapist believes will be particularly effective in addressing the child’s problems.

How Does Play Therapy Work?

At this juncture you may be thinking, “But all children play. What’s the specific advantage of ‘play therapy’? If children use play to understand the world, wouldn’t they wind up doing the same on their own?”

Generally, no, they will not; the directed aspect of play therapy is used to cover diverse areas in specific ways, conferring the following benefits:

Healing from Past Stressful or Traumatic Experiences is Enabled

Children experience and process trauma differently to adults; difficult experiences (and the feelings that go with them) may become “stuck” in their minds, or be locked away from conscious awareness. Yet, these feelings are not gone, even if they are not evident to the child; they typically manifest as behavioral problems.

Children generally lack the ability to immediately “talk through” these traumatic experiences (as an adult would through counselling); instead, they must start at the base level of simply making sense of them. Only by doing so can these experiences by assimilated into conscious awareness, into what the child already knows of the world. This is called the act of “processing” an experience, and will result in the healthy expression of thoughts and feelings as the child comes to a new understanding of the experience. Behavior subsequently changes for the better, as the feelings are being expressed via a different channel.

Play allows children a safe way to express their pain, to exorcise the problem behaviors using toys and come to grips with what happened to them in a non-threatening environment where they will not be judged. Often children who have been traumatized by car accidents, for example, will play out two toy cars being crashed together, and children who have witness domestic abuse (physical or emotional) will act out what they saw via puppets.

This symbolic representation and harmless reenactment is often itself enough to bring about positive behavioral changes in children. “Stuck” feelings become unstuck, little by little, without totally overwhelming the child, and traumatic memories are reintegrated into the psyche. This heals the mind of the child, preventing maladaptive coping mechanisms from developing later on in life.

The Expression of Feelings is Encouraged

Children who have been through difficult or traumatic experiences need to vent the troubled feelings that follow, but without a safe setting in which to do so, they frequently run into problems. The feelings manifest as problematic behaviors and they are told to cease the behaviors, and so they learn that to cope with these feelings, in essence, they must repress them. Naturally, this leads to poor mental and emotional health later on in adulthood.

Play therapy prevents this from happening by instead encouraging the child to release the emotions caused by his or her traumatic experience. Through doing so, the feelings are decreased in intensity naturally, rather than being bottled up and turning into the proverbial ticking time bomb. This not only facilitates the child becoming healthier in behavior, it also results in there being more mental energy left over for creative activities and problem-solving, leading to the child mastering tasks more easily and growing more confident.

Play is a creative act, one which helps children to learn about themselves and their environment and solve the problems therein. Play therapy facilitates this process and ensures that the child gets the correct lessons out of his or her play; for example, if the child is acting out a character being physically harmed by a villain, he or she will be encouraged to relate to and sympathize with the character in the game who is being attacked. Through doing so, the child will begin to conceptualize that being hurt is not the fault of the victim in such situations, so he or she is not at fault in his or her own traumatic experience. The child can find a renewed sense of hope by then having a hero character rescue the victim, affirming that the victim is not alone in his or her bad experience, and that it has a safe and loving end. The child may even be encouraged to have the victim character become the hero, and through this, feel a sense of personal empowerment.

This process also allows a child to act out, and thus begin to understand, the multiple roles in such situations—that of the villain, the hero, and the victim. This mimics the part of adult therapy where an adult is encouraged to look at a troubling situation from multiple perspectives, and is known to help troubled children retain their ability to empathize (rather then becoming “cut off” and overly guarded in order to cope with inner pain).

The Development of Healthy Decision-Making Skills is Facilitated

Play therapy also provides a safe space in which a child can experiment with a variety of different potential choices when it comes to dealing with the aftermath of a traumatic scenario. This enables the child to take control of his or her environment and to become accountable. This will be guided by the therapist; if the child is having a hard time making decisions in the playroom, the therapist can help him or her overcome this tendency and learn how to be decisive, rather than helpless. If a child is a chronic rule breaker, he or she will be encouraged to assess the full impacts of this behavior and take responsibility for it. The therapist may curtail inappropriate behavior by setting limits and enforcing consequences in a non-judgmental way that encourages the child to make the right behavioral choices because doing so mitigates consequences that are not in the child’s best interest. These processes move the child away from being a victim and toward having a sense of control over his or her self once again.

The Child is Taught How to Communicate Problems and Concerns

The above-described elements of play therapy almost invariably coalesce into better communication skills for the child. The symbolic expression of their pain through play therapy allows troubled children to distance themselves from the immediate impact of their memories and fears while also giving them a way to communicate these trying memories and emotions to others. This plants the seed for better communication skills later in life, and the eventual ability to vocalize their experiences effectively. Adults in the child’s life will also be able to get an immediate picture of what the child is going through, enabling them to help the child cope.

New Ways of Thinking and Behaving are Learned

Play therapy is designed to be age appropriate, challenging and stimulating a child’s mind in the ways needed for positive growth. Play therapists can cut off self-destructive tendencies at the pass by identifying self-critical and self-defeating thoughts in traumatized children.

Children will be moved past misunderstandings; perspectives on situations can be broadened in such a way that troubled children develop more adaptive perspectives about these situations (e.g. they will move past self-blame, such as the belief that they are the cause of a parent’s divorce because they misbehaved).

Play therapists can also model positive behaviors so that they replace the child’s current problematic ones, teaching children concepts they may not be familiar with owing to their background, such as the difference between sharing and being selfish or between cooperation and fighting. Once children know healthier ways of interacting and experience the positive emotions and rewards that come with using them, they often naturally adjust to doing what is right.

Without the presence of a trained therapist to guide the aforementioned processes, many children never come to these healthy conclusions through the use of play on their own. Play therapy is therefore necessary, both to create a safe environment in which to learn better coping skills and behaviors, and in providing the models upon which they are built.