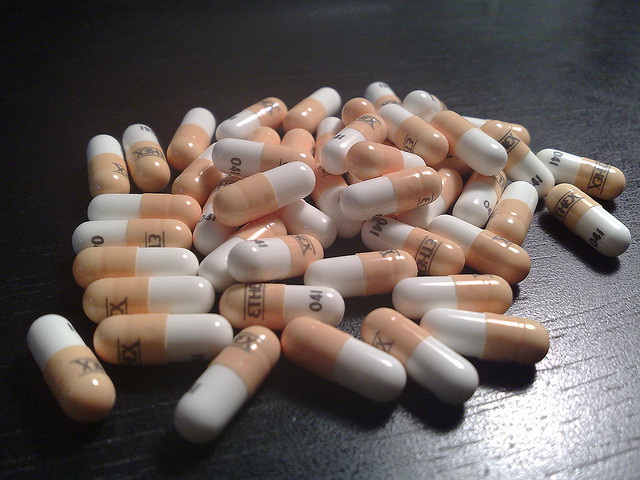 Chlorpromazine was the first antipsychotic drug, used during the 1950s and 1960s. Used as chlorpromazine hydrochloride and sold under the tradenames Largactil (the “liquid cosh”) and Thorazine, it has sedative, hypotensive and antiemetic properties as well as anticholinergic and antidopaminergic effects. Today, Chlorpromazine is considered a typical antipsychotic.

It is classified as a low-potency antipsychotic and is used in the treatment of both acute and chronic psychoses, including schizophrenia and the manic phase of manic depression. It is also used in porphyria, as part of tetanus treatment, for behavioral problems in children and as a preanesthetic.

It is derived from phenothiazine, its chemical name is 2-chloro-10-[3(-dimethylamino) propyl] phenothiazine monohydrochloride and its molecular formula is C17H19ClN2S•HCl.

Previously used as an antihistamine and antiemetic its effects on mental state were first reported by the French doctor Henri Laborit in 1952 as sedation without narcosis. It was first used for psychiatric patients by Pierre Deniker and Jean Delay the following year. It went beyond simple sedation with patients showing improvements in thinking and emotional behaviour. Ironically, the antipsychotic properties of chlorpromazine appear to be unrelated to its sedative properties.

The drug had been developed by Laboratoires Rhône-Poulenc in 1950 but they had sold the rights in 1952 to Smith-Kline & French. The drug was being sold as an antiemetic when its other use was noted. Smith-Kline was quick to encourage clinical trials and in 1954 the drug was approved in the US for psychiatric treatment. Over 100 million people were treated but the popularity of the drug fell from the late 1960s as the severe extrapyramidal side-effects and tardive dyskinesia became more of an concern.

From chlorpromazine a number of other similar neuroleptics were developed.

It is occasionally used off-label for treatment of severe migraine.

Natural alternatives that can help in a treatment program include large amounts of vitamins B3, B6, B12 and folic acid and zinc, Amino acids and enzymes, Ginkgo biloba, fish oils and flax seed oils.