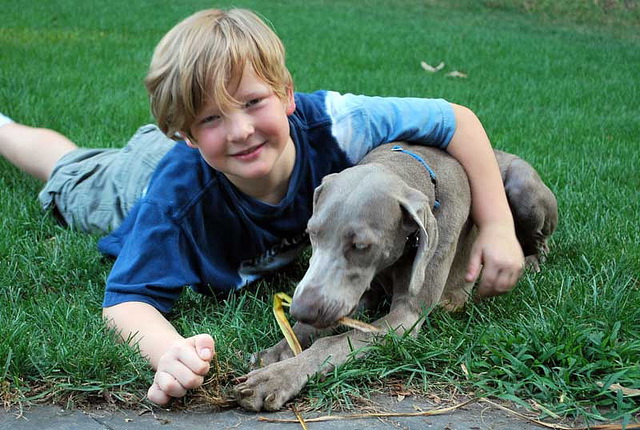 It is believed that the therapeutic application of this effect was first utilized during the 1940s, when an army corporal had the idea that bringing his little Yorkshire Terrier into a soldiers’ hospital would help to cheer up the wounded convalescing therein. This was so successful that the dog went on to engage in a career of comforting that spanned another twelve years, and helped to spawn what is now known as animal assisted therapy (AAT).

What is animal assisted therapy?
The term “animal assisted therapy” today describes the use of specially trained animals to improve a person’s physical, emotional, and social state. It has been shown that AAT can reduce anxiety, loneliness, improve self esteem, and help people to heal from a variety of conditions. AAT differs from the use of animals for direct physical assistance (e.g. seeing eye dogs); rather than placing the emphasis on practical aid, AAT places it on psychological support and physical healing.

What are the benefits of AAT?
There is a large body of research which attests to the calming effects of animals, effects pronounced enough to lower blood pressure and soothe severe anxiety. Animals also aid a great deal in reducing loneliness and feelings of depression, making AAT particularly useful when it comes to aiding those who deal with chronic isolation (such as individuals confined to hospitals or nursing homes). AAT is also excellent for the elderly as it provides a great deal of mental stimulation, helping to prevent or stall the progression of dementia and Alzheimer’s, while also helping to treat hypertension and lower cholesterol levels. AAT also provides essential non-judgmental socialization for people who have suffered a disfiguring injury or have a deformity that makes them feel self conscious when engaging with others.

Children who have been traumatized are often unable to effectively vocalize their feelings, making the nonverbal communication and comfort provided by AAT invaluable.

It is worthwhile to note that animal assisted activities (AAA) may also be used to improve the overall quality of life of many of the same kinds of people as mentioned above, but these differ from true AAT. AAA are often more casual, and aimed at either assisting with educational activities, improving motivation, or are simply arranged for the sake of enjoyment. AAT, on the other hand, consists of many different forms of structured therapy tailored to specific situations and conditions.

AAT: What to expect?
When seeking AAT, one should be aware that one will not necessarily just be encountering typical household companion animals, such as cats or dogs. A wide range of animals are used in AAT, even large animals like horses, or exotic creatures such as dolphins. Obviously, when working with some of these less conventional creatures, one must be prepared to travel to the animal’s locale.

More typically, however, AAT is administered in an institution, such as a hospital, nursing home, school or library, and is conducted in a routine way, with visitors bringing in a certain animal at a scheduled time each day or week.

When should AAT be avoided?
AAT should be avoided any time a safety concern is present for either the people or animals involved. Both animals and handlers must be sufficiently trained and ready for the challenges of working with patients. Animals must be vaccinated and in good health, and extra caution (and training) must be taken when the therapy involves the use of a large animal.

AAT should also be avoided in certain “common sense” situations, such as with people who are afraid of animals, or allergic to them. Patients should never be given AAT without first being asked about their willingness to receive it. Before committing to AAT, a test visit between the animal and patient is generally a good idea.

Additionally, those who have reduced immunity (due to conditions such as AIDS, those who are enduring chemotherapy or immune-suppressing medications, etc.) must get clearance from a physician before they engage in AAT. People with severe mental health issues should also be carefully assessed before they are allowed to engage in AAT, and monitored closely during sessions.

Conclusion
Animal assisted therapy is not merely a fancy way of describing the enjoyment humans get from spending time with various companion animals; it is a valid form of therapy with a wide range of proven emotional and physical benefits.

The list of conditions that respond to AAT includes everything from cerebral palsy to attention deficit disorder to hypertension to PTSD and many more. AAT is often able to instigate breakthroughs in these conditions when all other forms of therapy have failed to bring about noticeable relief. AAT is also highly beneficial to those who have issues socializing and/or communicating with others, such as children or those with Autism.

AAT is believed to be particularly effective because it is a two-way street; the act of giving love is deeply healing, and with AAT, the patient is able to give love to another while also receiving care, creating the perfect therapeutic feedback loop. Many other therapeutic modalities are, by comparison, somewhat incomplete.